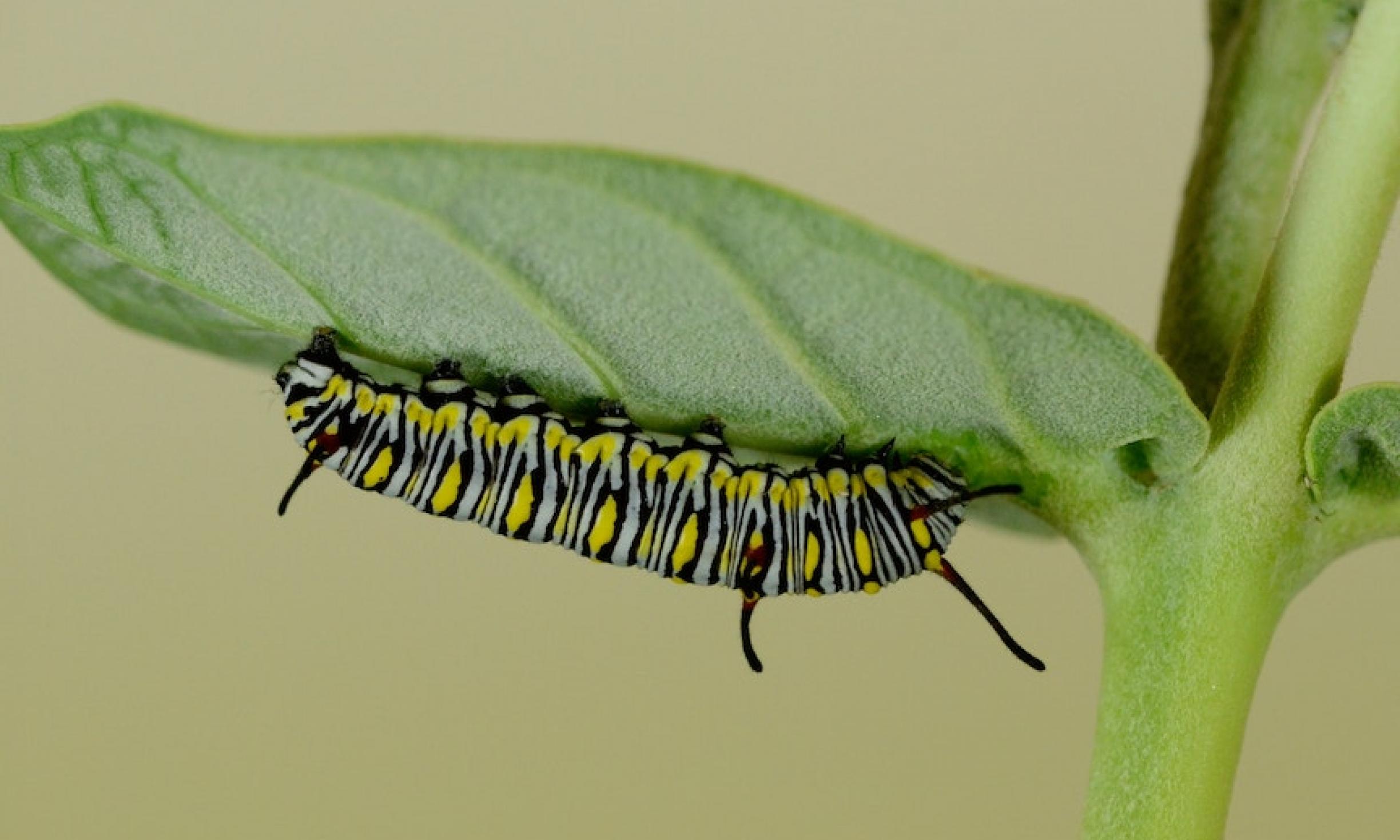 It’s common knowledge that monarch butterfly caterpillars eat only milkweed, but did you know that many other insects also feed exclusively on this host plant? Munched milkweed leaves could also be the work of (among other things) milkweed tussock moth caterpillars (Euchaetes), milkweed longhorn beetles (Tetraopes), milkweed weevils (Rhyssomatus), or swamp milkweed leaf beetles (Labidomera clivicollis). Each insect has its own particular style of feeding—perhaps the most distinctive is the milkweed longhorn, which bites the leaf midrib to stop the flow of sticky latex, then is able to eat a notch into the tip of the leaf without getting its mouthparts gummed up. The larva of each type of beetle has its own niche: leaf beetle larvae feed openly on the leaves, the weevil larvae develop inside the stem, and those of the longhorn feed on the roots.

In addition to these insects with chewing mouthparts, there are beaked insects that suck milkweed juices, including large milkweed bugs (Oncopeltus fasciatus), small milkweed bugs (Lygaeus kalmii), and at least three species of aphids. There are also at least two midge species that develop in galls on milkweed; Neolasioptera asclepiae causes stem swellings, and a Contarinia species distorts the leaves. And then there are leaf-mining fly larvae (Liriomyza asclepiadis) that create large, discolored blotches as they feed inside the leaves.

This type of host specificity is by no means unique to milkweed-feeding insects. In fact, the majority of plant-feeding insects are very particular about what plants they feed on, and it seems that just about every kind of plant has a whole array of interesting creatures that are particular to it. In the case of oaks, there are hundreds of different gall wasps, leafminers, and other insects that are found on them and nothing else.

This amount of diversity can be overwhelming, and it may be one of the reasons that more naturalists don’t dive into studying insects. One way to get to know the insects that may make them seem less daunting is to choose one type of plant that grows near your house and follow it through the seasons. See what insects you can find occupying the various niches: pollinators, external foliage feeders, gallmakers, leafminers, leafrollers, and so on. If you find immature stages that you can’t identify, try raising them. It’s amazing how easy it is for an amateur naturalist to make discoveries that are new to science. Sawflies (Symphyta) and leaf beetles (Chrysomelidae) are two examples of large groups of ubiquitous plant-feeding insects for which the majority of the species’ larvae (and therefore their host plants) have never been documented.

When you get to know the habits of the insects on one plant species really well, you may find that you can learn to identify each one just by the sign it leaves behind. I alluded to this already in talking about milkweed. For another example, there is a lot of witch hazel in the woods where I live. The best-known insect sign found on witch hazel is the leaf gall made by the witch hazel cone gall aphid (Hormaphis hamamelidis), but there are also spiky, fruitlike galls made by the spiny witch hazel gall aphid (Hamamelistes spinosus) and leaf galls made by two different midge species that have neither common nor scientific names yet, in part because no one has ever seen the adults to describe them. A pretty little moth, Cameraria hamameliella, has larvae that feed together in communal mines inside witch hazel leaves. In the fall, each larva spins a circular “nest” of silk around itself so that it is protected from the drying and crumpling of the leaf once it has fallen to the ground.

These are all well documented signs, but there are others that I’m having to figure out for myself. I see several distinct types of leaf rolls on witch hazel leaves, and I believe that each is made by a different species of moth. (Leaf-rolling moth larvae use silk to construct leaf shelters inside of which they live and feed.) First thing in the spring, one kind of caterpillar makes a small, simple fold at the edge of the leaf base, and another makes a large, cigar-shaped roll beginning at the leaf tip. Later in the season, lopsided, cone-shaped rolls with conspicuous bands of silk appear on the sides of the leaves, along with a species that starts out living in a narrow tube of its own excrement on the underside of the leaf. There are six species of tortricid moths (which are commonly known as “leafroller moths,” but not all tortricids are leafrollers and not all leafrollers are tortricids) recorded as feeding on witch hazel, so this gives me some suspects to work with.

I’ve solved the mystery of who makes the cigar-shaped rolls, but so far, many of the witch hazel leaf rolls I have collected have only produced parasitoid wasps rather than adult moths. This is a common occurrence when trying to raise any kind of insect larvae. Some parasitoids are specific to a particular species of insect (and therefore, to a particular type of plant), while others are generalists within a particular category of host insect lifestyle, such as leafminers, leafrollers, or gallmakers. There are also inquilines—species that are opportunistic or obligatory dwellers in the galls, nests, etc. of other insects, but do not typically harm them. I opened a witch hazel cone gall this spring to find a tiny moth larva living inside; as far as I can tell there is not a moth species known to do this. The first moth to emerge from one of the cigar-shaped rolls I collected this spring was a species that has not been recorded as feeding on witch hazel, but later another moth emerged from the same roll, of the same species that emerged from all the other cigar-shaped rolls. So evidently the first moth came from a caterpillar that just thought the leaf roll was a nice place to settle down and pupate. Several scientists are devoting their careers to documenting how leaf-rolling and leaf-tying moths are “ecosystem engineers,” creating new habitats for all sorts of barklice, springtails, mites, and other organisms that live in the leaf shelters either while the moth larvae are still there or after they are gone, feeding on their frass (excrement, webbing, and other debris) or on each other.

So what is the point of all this? I personally just think it’s fascinating how each of these tiny animals has its own very specific role to play out in the world, and I love to learn about how they all interrelate. But whether or not you are excited by the nitty-gritty details of insect lives, I hope you can appreciate the larger significance of their specificity. Each kind of plant has a set of organisms that have evolved with it and are dependent on it for survival. Plants that have been on this continent for a long time tend to have far more associated organisms than those that were introduced recently. In fact, the relative scarcity of host-specific insects and pathogens attacking them in their new habitat is a big part of why some plants become “invasive.” If you focus your attention on birds and mammals, it might not be clear why the widespread replacement of native plants by exotic ones would be an issue: the dense thickets formed by multiflora rose and Eurasian honeysuckles in North America can be great habitat for rabbits, bobcats, and veeries, because they are responding mainly to the habitat structure rather than to its species composition. And many exotic plants spread precisely because vertebrate animals eat the fruits and then excrete the seeds elsewhere. But the whole reason that migratory birds come north every spring is to take advantage of all the insect food that is suddenly abundant during the growing season. Not all insects eat plants, of course, but it seems likely that having a larger proportion of the landscape occupied by recently introduced plants leads to a smaller insect population—reducing the food supply not just for birds but for the insectivorous mammals, reptiles, and amphibians that are themselves food for larger animals.

I don’t agree with people who brand exotic plants as evil, and I’m not a fan of waging chemical warfare on them. “Native” and “exotic” are two ends of a continuum, rather than truly distinct categories, and the value of each plant species to other organisms is likely to increase as time goes by. But in the shorter term, it is good to understand and appreciate the deeper relationships that those that have been around for longer have with their environment, and we would do well to try and keep them around.

Charley Eiseman is a naturalist, educator, and author.