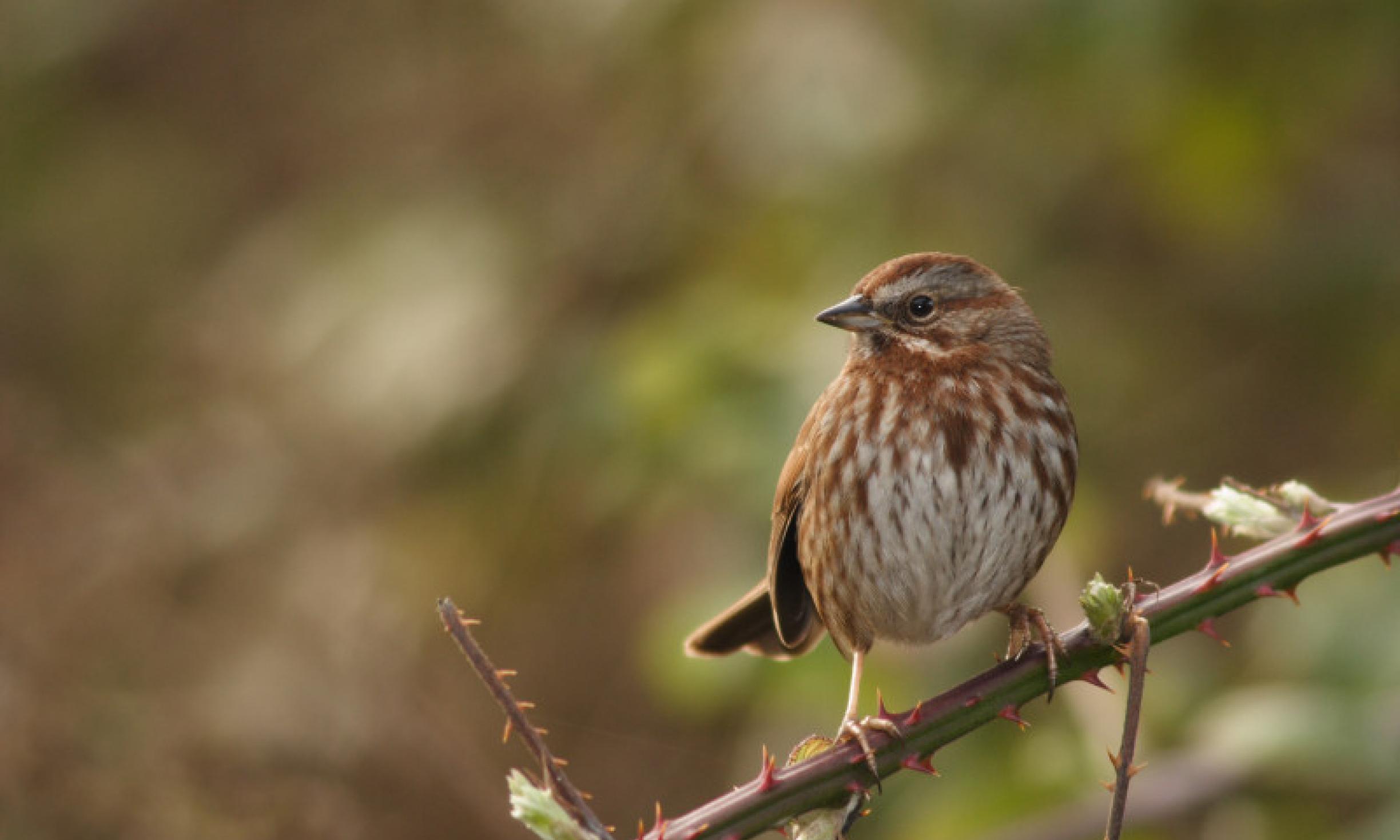 Baseline Cues: Watch for singing from perches near top or edge of thickets

Alarm Cues: Distinct call note given in aggressive, staccato cadence as danger nears very expressive while scolding predators in territory. Hooking and sentinel behavior are common in alarm routines. May sing out of context.

Tips: Song Sparrows can be learned, and should be learned, right in the backyard. Watch this bird carefully throughout all times of day. Get a sense of its territorial boundaries and learn the nuances of its communication between mates, and other members of its species as a baseline reference.

Every person in America probably has a Song Sparrow living near them. We can all walk to a Song Sparrow within a couple of minutes whether in the middle of the city, or in the suburbs, or in the wild and remote reaches of a national park. Song Sparrows are virtually everywhere. The only places Song Sparrows tend to avoid is in the middle of really dark, dense woods. And, thereafter walking for a bit through a deep forest, will be a little clearing with some salmonberry bushes, and there will be a Song Sparrow. Next to the American Robin and the Common Yellowthroat, the Song Sparrow has done more to tell me about the presence of coyotes, feral cats, house cats, bobcats, cougars, foxes, and people than just about any other songbird.

Bird language enthusiasts should take the time to get to know this bird very well. The Song Sparrow is very good at telling the world where the predators are. Their alarm call is very distinctive and nothing else sounds like it. Once the alarm note of the Song Sparrow is learned, and the observer is trained to listen for this voice on the landscape, this sound will become very familiar. The tracker of bird language will eventually find that having Song Sparrows as neighbors can even border on distracting as they always seem to be telling on someone. The Song Sparrow is very expressive and willing to follow predators and keep the world posted on what’s going on. If the weasel is in the thicket, the Song Sparrow will hook up above it and call and point and call and point and follow it as it goes along. This will surely draw people to the window to listen, crane their necks, and then, unable to resist, out into the yard to see what is going on.

The Song Sparrow is an ideal bird to study from a bird language perspective. This species is common, suburban, rural, and urban in its distribution, maintains a small territory, and feeds on and near the ground. Song Sparrows also nest near or on the ground. Due to the territorial behavior of Song Sparrows, this species is anchored in its behavior for much of the year as well. Territory size is relatively small ranging between 0.5 and 1.5 acres depending on the productivity of the landscape in terms of available preferred habitat and food sources. Overgrown fields, hedgerows, marshes, thickets, and a variety of suburban, urban and agricultural situations suit this species well.

Song Sparrows are defined in this work as a ground bird. Ground birds exhibit certain qualities that are true of this species; coloration and striping both match the environments it inhabits. Other songbirds may have bright plumage; the Song Sparrow’s plumage is a varied mix of earth tones of browns, tans, grays, and black. The patterns of stripes of this and other sparrows do very well to cause them to disappear among the twigs of brush, or among the stems of forbs and grasses. The lighter tones of the sparrow are also subdued so that even in direct light they are not all that reflective. The Song Sparrow is a retiring and shy bird in much of its behaviors, spending a lot of its time in the shadows or in areas matching its coloration. Ground birds are also characterized due to the placement of their nests and their feeding behaviors. Song Sparrows are known to nest on or near the ground and a great percentage of their feeding behavior is on the ground where they feed on a variety of invertebrates and plant seeds.

The Song Sparrow, and many other sparrows are by their nature retiring birds. Even though they live all around human habitations, given the choice, they would prefer to be unseen by people altogether. They are very secretive, especially around their nesting areas. They have often been observed to run along the ground in the grass or thickets. Due to this behavior, they might be easily mistaken for a small mammal or reptile darting unseen in the brush.

When the routine of invisibility is learned, the observer will get used to sitting still for long periods of time, or moving very softly and slowly. The reward will be more frequent observations of the Song Sparrow in its baseline behaviors at close range. The exception to the reclusive nature of the Song Sparrow is related to territorial aggression, courtship, and the behaviors that accompany singing. Male Song Sparrows, or either parent defending a nest, will allow themselves to be viewed in obvious places under baseline conditions and frequently when exhibiting alarm.

Sparrows are mellow scratch-feeders. They scratch a little, stop, look and listen, scratch, hang out…anybody who scratches has to stop all the time, because if you scratched continuously, you would be instant lunch for somebody. Because they stop, look and listen, that’s what makes them such wonderful allies out in the forest, because they are your eyes and ears. Sparrows are really successful, partly, I think, because they’re such generalists; they can eat anything and they can live anywhere. Plus they have good camouflage, and they’re cooperative—there are always several of them together to look out for each other. In companion-calling birds, that always depend on the presence of another, are some of the best alarm-call birds there are. Like cardinals, cat birds, yellow throats: they’re all really into pairing up and keeping an eye on each other. They’re really dependable and dependent on one another.

The Song Sparrow is frequently seen in the proximity of another of the same species, which is likely to be its mate, but may also be a sub-adult individual from a previous brood behaving in a submissive manner. I one day watched a song sparrow feeding along the Skykomish River. It was just flipping its wings and flicking its tail. It was feeding the whole time and flicking at the same time. It occurred to me that I couldn’t find its mate, and it occurred that he couldn’t either. Finally, I figured out that the reason it was doing all that displaying is that it had lost track of its mate. While she was gone, he was really nervous and doing all this obvious stuff like feeding out in the open and flipping and flicking. This was during the winter, so they have a feeding area, rather than a defended territory, and his mate sitting on the nest. Once the mate came back again, it fed very quietly in the shadows and didn’t do all that displaying. So they obviously depend and rely on each other a great deal, because he put a lot of energy into locating his mate as quickly as possible.

A song also has rhythm. For example, a song sparrow will pause eleven seconds after completing its song before starting again. There is a rhythm to the song in time. They send a lot of non-verbal communications by flipping their wings and twitching their tail and doing a lot of these bobbing types of things. They’re talking to each other with bodily signals, not just vocal signals, and the little song sparrow does the same thing. When he comes in close he gives off his territorial song and then he flies over right after I make his imitative call and then he comes a little closer and then he stops singing and comes in real low, and flies from post to post, down in the thicket. While he flies he deliberately makes a lot of wing noise. So he would make a song and then he would go—swish, swish, swish, swish. So I started making that sound in conjunction with my singing and that brought him really close…I could have grabbed him.