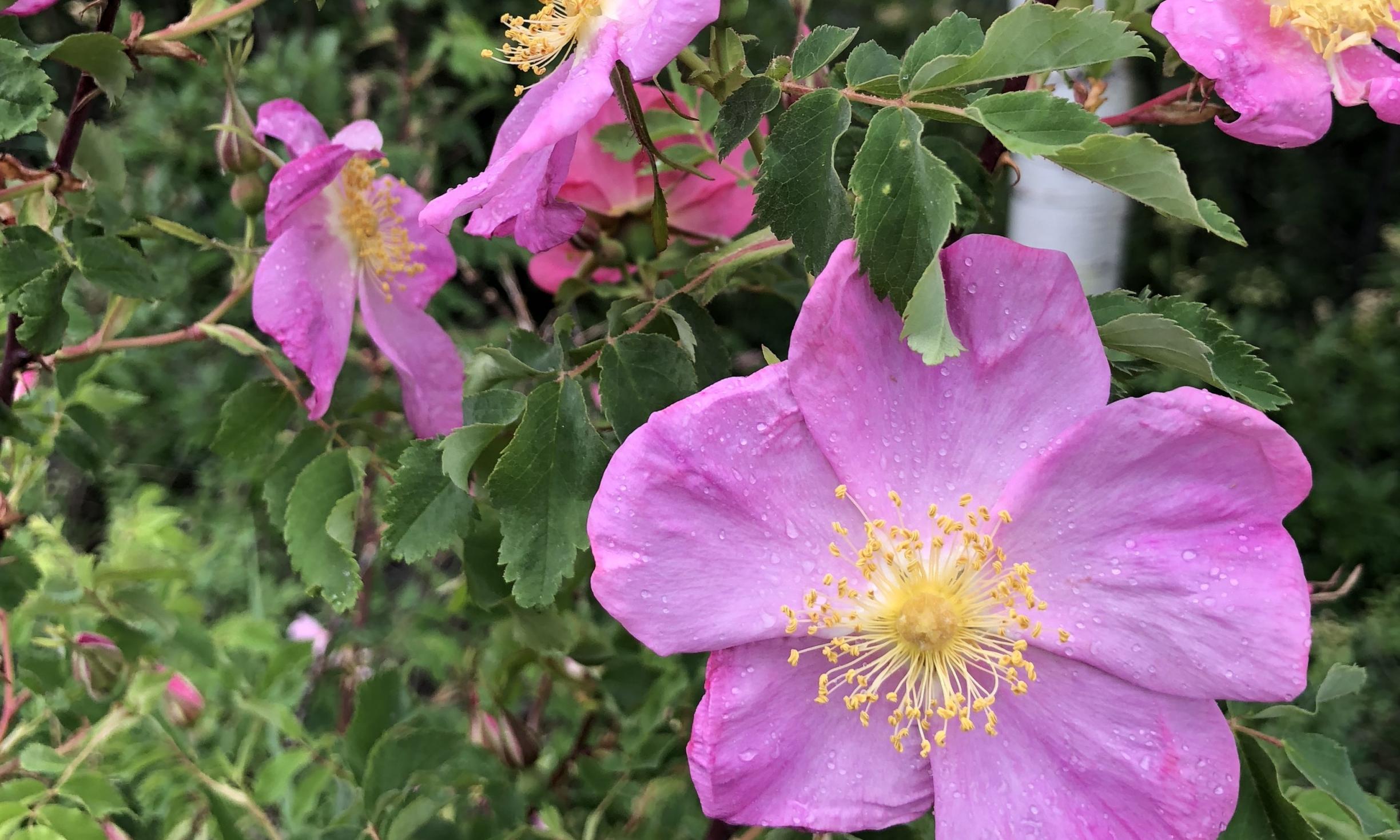 Herbal medicine is people’s medicine. And people’s medicines are the medicines of the earth: the common weeds. Weeds, though often reviled, are powerhouses of nourishment, medicine, magic, and beauty. Their medicinal qualities, when wisely extracted and used, can counter major as well as minor disturbances of health.

But do beware! Eating weeds has been known to awaken the “wild woman” within. A wild woman may run with the wolves, or even howl with them. Who knows what she’ll do if she eats weeds and gets loose!

Weeds in the rose family — Rosaceae — can certainly be triggers of wild and out-of-bounds behavior. Wild roses are particularly noted for inciting wild sensations in women. Look at how they spread their long limbs and intoxicating scent over everything. And what could be more feral, more dangerously wild than a blackberry patch? Brambles are in the rose family. At my brother’s Oregon homestead, and along roadsides down under, blackberry canes grow as thick as my wrist and more than twice my height… overnight. That’s wild — untameable, uncivilized, uncultivated, unconquered — indeed. Who knows what will happen if you inhale their perfumes, consume their flowers, make teas of their leaves, bite into their fruits…

But inhale, consume, drink, and bite we do. The rose family lavishes such abundant love and rich fruitfulness on us — who could resist her gifts? Who could refuse Rosaceae as juicy and delicious as peaches, apricots, cherries, plums, apples, pears, quinces, strawberries, blackberries, raspberries, rose hips, and almonds? Who would disdain to use Rosaceae as safe and effective raspberry leaves, hawthorn hips, peach pits, cinquefoil roots, and agrimony tops? Who is unaffected by the love magic of a deep red rose?

Thorny, exotic, and deeply nourishing to all the senses, the rose family invites you to a friendly, sensual, love-in.

Almonds (Prunus dulcis). The only rose whose seeds we eat. One of my first teachers told me to “Eat three almonds a day to prevent cancer.” She was right, too. Almonds contain numerous phytochemicals that are known to counter cancer. More prosaically, ground almonds are a superb skin scrub that removes blemishes while nourishing the skin deeply.

Apricots (Armeniaca vulgaris). Both fruits and pits are highly regarded as anticancer helpers. The FDA says apricot kernels are poisonous; nonetheless, you can buy them in Asian markets and through underground networks of those who believe in their value. Unsulphured dried apricots are a regular part of my anticancer lifestyle; I don’t eat the pits.

Hawthorn (Crataegus species). Flowers, leaves, and fruits are all medicinal. Tincture of hawthorn berries is used worldwide to help lower high blood pressure, relieve congestive heart disease, and counter arteriosclerosis. A tea of dried hawthorn flowers and leaves is said to strengthen the heart muscle, ease anxiety, and soothe the grief of a broken heart.

Agrimony (Agrimonia eupatoria). Flowering tops of this garden weed are dried and brewed into a tea considered helpful for diabetics and others with spleen, kidney, or liver stress. Agrimony is most often used to ease the pain of gallstones and acid indigestion. Salve or oil of fresh agrimony in flower is said to relieve varicose veins.

Blackberry (Rubus villosus and other species). The root is a good choice for an astringent tincture. Prolonged use of a tea of the leaves is said to cure not only simple diarrhea, but even serious intestinal problems such as gastritis, colitis, and irritable bowel syndrome. If you chew fresh blackberry leaves to heal your bleeding gums, you’ll be following a tradition that goes back to Biblical times.

Cinquefoil (Potentilla canadensis and other species). Roots and leaves, flowers and seeds can be made into a tincture or dried and brewed as a tea. Cinquefoil remedies provide a mild astringent action sufficient to check diarrhea, nose bleeds, and bleeding gums. Potentillas are wonderful in the garden, too, and many cultivars are available. They flower freely and continue flowering for months, even in dry, poor soils.

Raspberry (Rubus strigosus, R. ideaus and other species). A leaf infusion is a famous helper for pregnant women who want a well-toned uterus, and thus an easier birth. Raspberry infusion is used to prevent miscarriage when taken at the beginning of pregnancy, ease labor pains during the birth, and increase milk supply after. Some midwives rely on it to prevent postpartum depression. Fresh raspberries preserved in apple cider vinegar are a delicious heart tonic. Tincture of fresh raspberry offers fragrine, a tonifying alkaloid which strengthens the uterus and helps the hormones dance.

Rose (Rosa rugosa, R. canina and other species). Hips preserved in apple cider vinegar are a tasty immune system tonic. The buds of rose leaves put up in half glycerine and half water yield a superior hormonal tonic. My favorite rose treat? Rose petals preserved in honey. What a delicious way to strengthen my heart, my nerves, my glands, and my immune system. A cold compress of rose water is a lovely way to relieve a headache.

Rowan (Sorbus species). This most magical member of the Rosaceae family is also called mountain ash. It is said to protect high energy spots and to act as a guardian to the “gates between the worlds.” The fruit is so high in vitamin C that it gave its name — sorbus — to the synthetic compound sold as vitamin C: ascorbic acid.

With their delicious fruits, powerful medicines, fragrant flowers, aids to beauty, and sweet magical sparkles, the Rosaceae have something for everyone. See if there isn’t one growing by your doorstep, in your garden, in a vacant lot, along the road. Smell it, eat it, enjoy it. Let yourself be a little wild. Join the wild wise women who are reweaving the healing cloak of the Ancients and spreading green blessings.