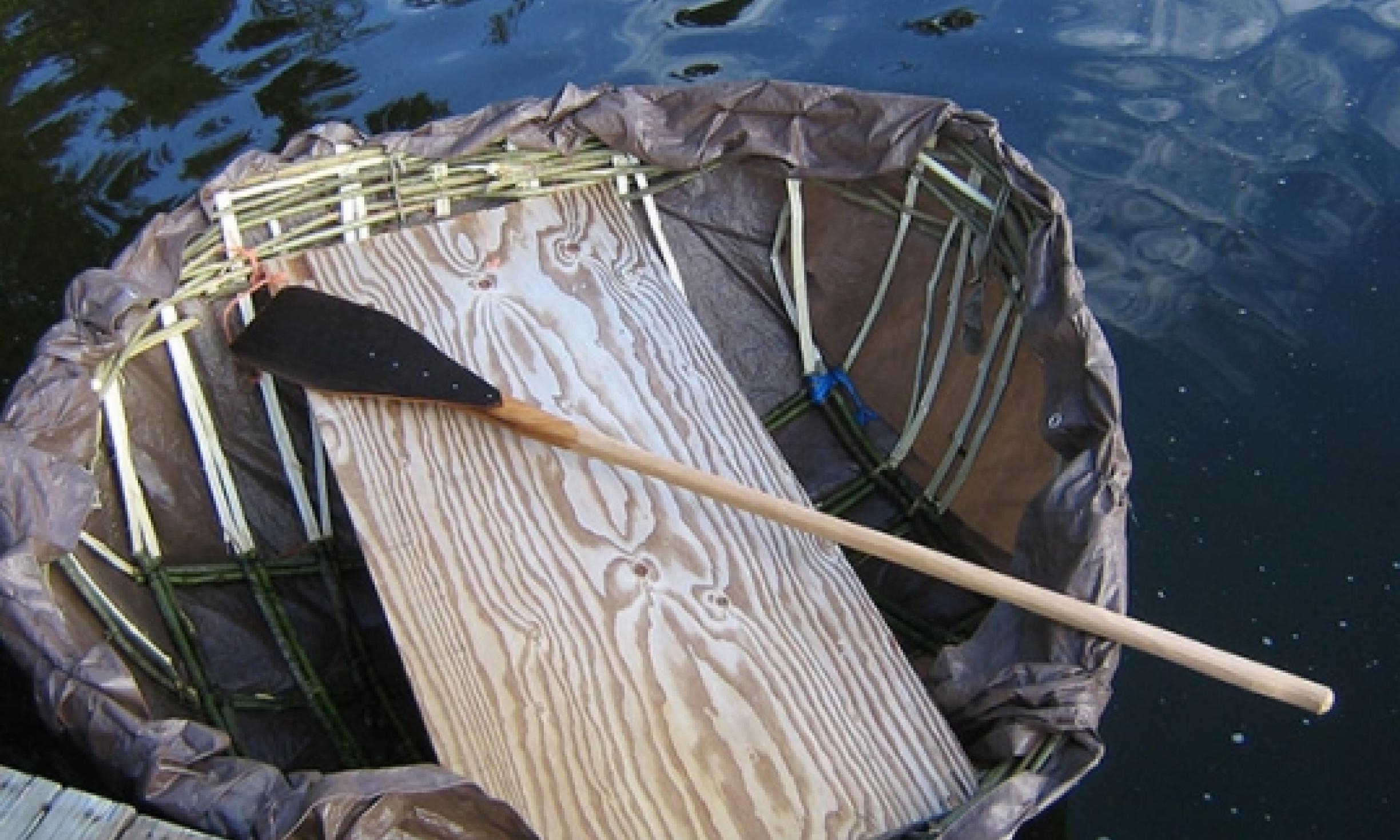 Once humans developed a need to travel on water in order to fish, trade, and explore, cultures worldwide created lightweight boats consisting of the skin of an animal stretched over a light frame of wooden poles or strips. One such boat is the coracle.

This is a boat of the British Isles and is varied in design depending on the locality. Most coracles are round or boxy in shape and are more or less a basket with the tarred skin of a bullock or horse stretched over it. Later in history, the skin of an animal was replaced with tarred cloth, which further lightened the weight of the craft. The frame of the coracle is constructed of woven willow shoots or nailed wooden slats. A wooden thwart (bench) spans the middle of the boat, and adds rigidity, as well as furnishing a place for a handle to carry it.

The coracle is used in swift-flowing rivers, and many times has flat bottoms to navigate the shallow waters. For fishing, two coracles, one man to each, drift with a net stretched between. As fish are caught, the net is drawn up to a boat and the fish extracted. The coracle is propelled by one oar, used with a sculling stroke. The sculling stroke consists of moving the blade of the oar in a figure-eight pattern, and can be accomplished one-handed by a skilled person. The craft is sculled from the front, with the pilot facing forward and in the direction of travel.

I recently built a coracle, having been fascinated with the design for a long while. I began by harvesting 24 vine maple saplings, 6 feet in length and 1/2 inch in diameter at the large end (though I searched for saplings with the least amount of taper.) I also gathered around 30 willow shoots, 10 feet long and 1/4 to 1/2 inch in diameter. These are for the rim of the “basket.” I marked out a rectangle the size of the coracle I wanted and then made holes equidistant around the perimeter with a stake to accept the ends of the maple poles. After driving each pole into the ground, I bent them over and drove the other end into the ground next to the base of the opposite pole. I started with the poles on the sides, and then bent over the poles at the ends. This created many pairs of crisscrossed poles. I then lashed the intersections of the paired maple poles. This was done traditionally with willow bark, but I used waxed nylon twine to create the square lashings.

The next step is to weave the willow around the bottom edge of this upside-down basket. This creates a rim for the coracle and keeps the ribs from splaying back out when pulled from the ground. The willow is woven in an over-under pattern until a section of about 4 inches is created. The bottom of the frame of the coracle can be flattened by placing a board with rocks on top of it and allowing it to settle over a few days. I left the bottom of my coracle slightly round for use in my lake, where the water is deep. The frame of the coracle can now be pulled from the ground and turned over, and the ends of the ribs woven down into the willow rim or simply trimmed flush with the rim. A bench is placed in the boat, and spans the rails at the widest point. This can be a plank that rests on the willow weave or can be fixed in place by drilling holes at the end of the plank and pushing the ends of the appropriate ribs through. 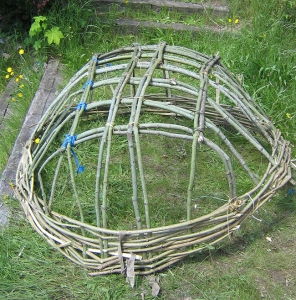 All that is left at this point is to cover the hull with a skin. Since I lacked the hide of a bullock or canvas and tar, I used a tarp. I centered the frame on top of the tarp, and drew the edges up to the rail. I sewed the edges over the rail of the frame, pulling the tarp tight when possible. Once the skin is sewn in place, the coracle is now ready to be launched!

It took me a while to get used to getting in the coracle, since it’s pretty tippy. I eventually got the hang of it, and sighed a breath of relief when I didn’t sink to the bottom of the lake! After paddling it around a bit, I realized that I had made the draft of the boat (the depth below the waterline) too deep, which made it difficult to paddle at any speed.

As you can see, the coracle is a simple boat to construct and results in a lightweight watercraft with materials easily found in your surrounding area. The coracle is a testament to our ancestor’s ingenuity and ability to confront environmental challenges through technology. The ability to take to the water had a profound effect on our species, and had its humble beginnings with simple vessels such as the coracle.