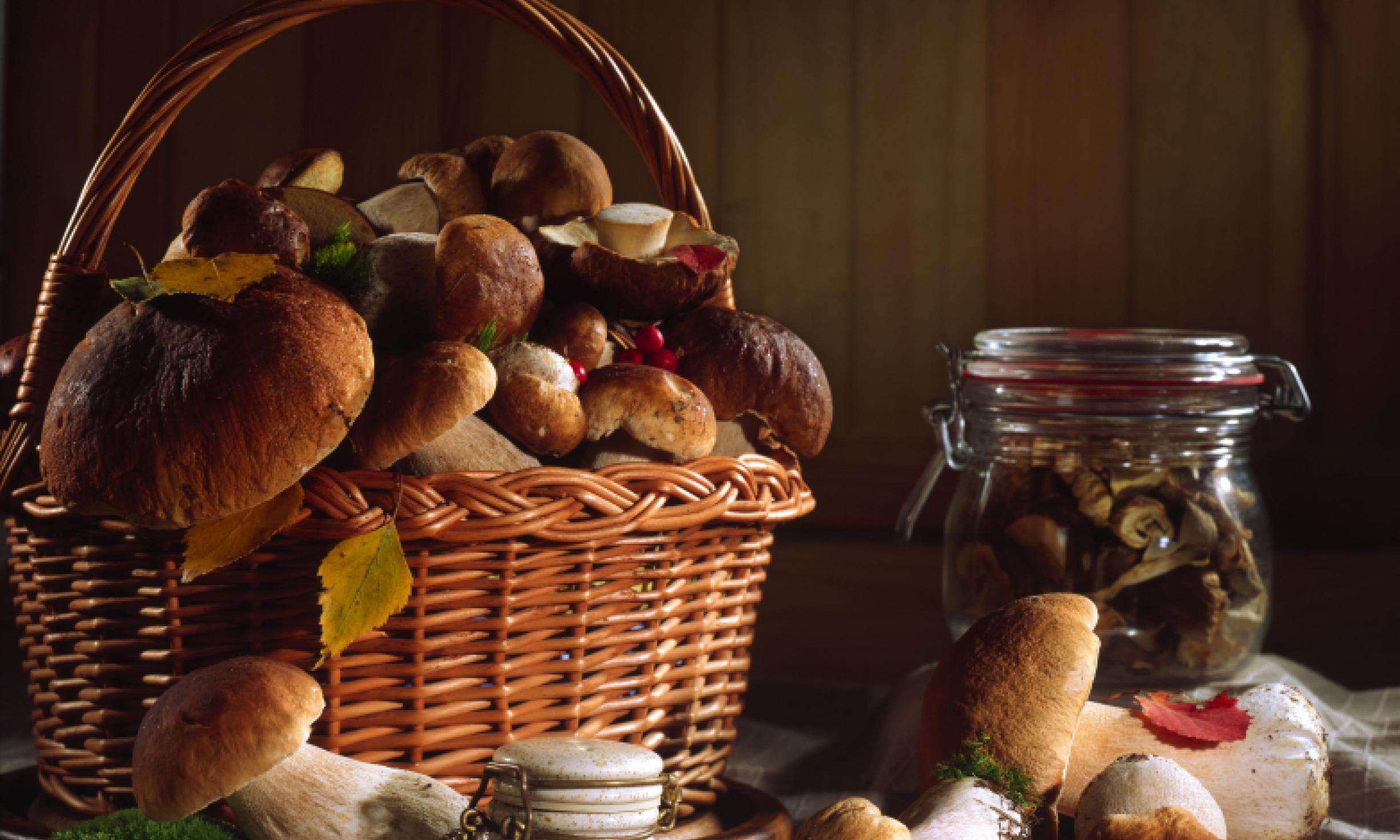 As summer nights lengthen into autumn, the forests of the Catskill mountains in upstate New York fill with magical, mystical, medicinal, and edible wild mushrooms. “Toadstool” is a quaint name for the many mushrooms that spring forth between rains, while “fungi” is the more technical term. Fungi are plants, but plants without flowers, or roots, or chlorophyll (which makes plants green). Strange shapes (some quite sexually suggestive), the ability to grow (and glow) in the dark, and psychedelic colors make mushrooms an obvious addition to any witches’ stew. But you will want some other reasons to make edible wild mushrooms a steady part of your diet. Is outwitting cancer a good enough reason?

It’s true. All edible fungi –including those ordinary white button mushrooms sold in supermarkets — are capable of preventing and reversing cancerous cellular changes. We aren’t exactly sure why. Perhaps it’s because fungi search out, concentrate, and share with us the trace minerals we need to build powerful, healthy immune systems. Or perhaps it’s because of their wealth of polysaccarides, interesting complex sugars that appear to be all round health-promoters. It could be because mushrooms are excellent sources of protein and B vitamins with few calories and no sodium. Or we could single out the anti-cancer, anti-tumor, and anti-bacterial compounds found in the stalk, caps, gills, and even the underground structures (mycelia) of every mushroom.

So be sure to cook your edible wild mushrooms though; avoid eating them raw. Scientists at the University of Nebraska Medical School found that mice who ate unlimited amounts of raw mushrooms (Agaricus bisporus) developed, over the course of their lifetimes, significantly more malignant tumors than a control group.

Everywhere I go in August and September — whether walking barefoot on vibrant green mosses or stepping lightly across the deeply-scented fallen pine and hemlock needles, whether climbing rocky outcrops festooned with ferny whiskers or skirting swamps humming with mosquitoes, whether following the muddy bank of a meandering stream or balancing on old stone walls inhaling the scent of righteous rot — I am on the lookout for my fungal friends.

My woods are especially generous to me with chanterelles, beautiful cornucopia-shaped mushrooms with a delectable taste. I find both the delicious little black ones — jokingly known as “trumpet of death” due to their eerie coloration — and the very-tasty and much bigger orange ones. Sometimes we return home naked from our mushrooms walks; if we find more ‘shrooms than we have bags for, we have to use our shirts and pants as carriers to help haul our dinner of edible wild mushrooms home.

The bright orange tops and sulfur yellow undersides of sulphur shelf mushrooms (Polyporus sulphuroides) are easy to spot in the late summer forest. Growing only on recently-dead oaks, these overlapping shelves make a great-tasting immune-enhancing addition to dinner. I have harvested the “chicken of the woods” in oak forests around the world and is one of my favorite edible wild mushrooms. In the Czech Republic, I saw a particularly large example as we drove a country lane. Stopping, I found a portion of it had been harvested. I took only a share, being careful to leave lots for other edible wild mushroom lovers who might come down the lane after me.

You don’t have to live in the woods and find your own mushrooms to enjoy their health-giving benefits. You can buy them: fresh or dried for use in cooking and medicine, and tinctured or powdered as well. Look for chanterelles, cepes, enoki, oyster mushrooms, portobellos, maitake, reishii, shiitake, chaga, and many other exotic and medicinal mushrooms in health food stores, supermarkets, specialty stores, and Oriental markets.

Maitake is more effective than any other fungi ever tested at inhibiting tumor growth. It is very effective when taken orally, whether by lab rats or humans dealing with cancer. The fruiting body of the maitake resembles the tail feathers of a small brown chicken, hence its popular name: “Hen of the Woods.” If you buy maitake in pill form, be sure to get the fruiting body, not the mycelium.

Reishi is one of the most respected immune tonics in the world. Reishii is adaptogenic, revitalizing, and regenerative, especially to the liver. Even occasional use builds powerful immunity and reduces the risk of cancer. In clinical studies, use of reishii increased T-cell and alpha interferon production, shrank and eliminated tumors, and improved the quality of life for terminal patients. Reishii and shiitake are great partners, the effects of one enhancing the effects of the other. Reishii is best taken as a tincture, 20-40 drops, 3 times daily.

Shiitake is highly medicinal and tastes good enough to eat in quantity. I go to an oriental market and buy the big, big, big bag of dried shiitake mushrooms for a fraction of what I would pay for them in a health food store. To use, I just rehydrate them by pouring boiling water over them or by dropping pieces into soups. Those who make shiitake a regular part of their diets, increase their production of cancer-fighting alpha interferon, reduce inflammation throughout their bodies, prolong their lives, and improve their ability to produce and utilize vitamin D.

Chaga is a rather ugly and intensely hard fungi found on birch trees. Baba Yaga and other Russian herbalists favor it as an immune nourisher, cancer preventive, and an aid to those dealing with melanomas.

Mushrooms are not just for food and medicine; they are renowned for their ability to alter our perceptions of reality. Psychoactive psilocybin mushrooms were used by the famous shaman/healer Maria Sabina in Mexico. The red-capped mushroom with white dots usually drawn next to the witch’s house is the mind-altering Amanita muscaria, sometimes called manna, and widely used in Siberian shamanic rites.

Whether you use fungi to make a shiitake mushroom soup or as a remedy for someone dealing with cancer, whether you stir them up a witch’s cauldron of spiraling power or sew them into a spirit bag, mushrooms offer magic and mystery, good health and good cheer.