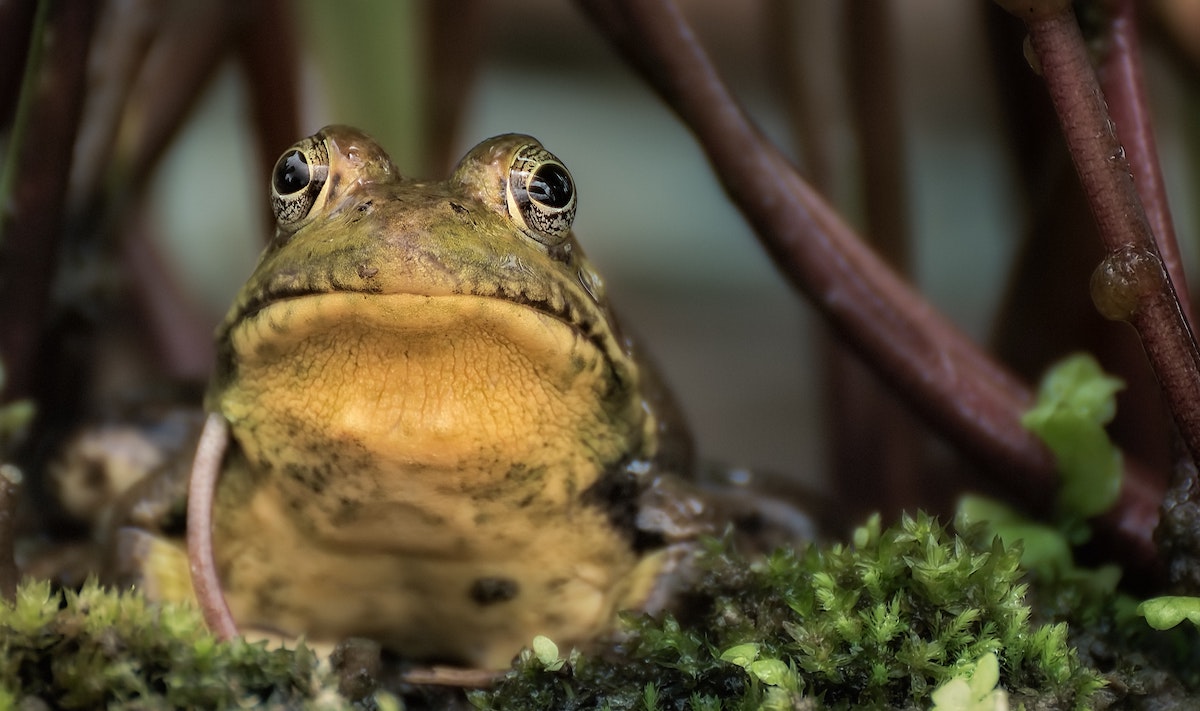 Amphibians are key players in ecosystems on every continent except Antarctica. They contribute to both terrestrial and aquatic nutrient cycling and energy flows that hold ecosystems together. In particular, they are excellent and efficient converters of food energy into growth and reproduction and serve as both predators and prey. Tadpoles, for example, convert detritus (decaying plant matter) into body mass, and then may be eaten by a garter snake, providing an essential link from an abundant energy source (“primary” producers, or plants) to an animal eating higher on the food chain (i.e. a secondary consumer).

The great role amphibians have of acquiring energy and passing it on in predator-prey interactions also comes with a price in our human-altered ecosystems today. The critical link can be exploited, as is the case when non-native amphibians establish populations in different ecosystems. The American bullfrog, Lithobates catesbeianus, is not native to the western half of the United States, and yet it can be found virtually everywhere in this country, and is now being found in places like Australia and the Andes. This invasive species has easy access to plant matter for developing tadpoles and insects, small/juvenile mammals, fish, birds, other amphibians, and reptiles that it can consume as an adult. Bullfrogs are in fact, “gape limited” predators—what they eat is basically limited by how wide they can open their mouth! Bullfrogs can successfully out-compete native amphibians for food and shelter, and put amazing pressure on other animals like garter snakes, by preying on the young and outcompeting the adult snakes for food in and around water sources.

So why can’t the invasive bullfrog still fill a needed niche in the ecosystem? Should we care if bullfrogs have replaced an array of native amphibians? In some cases when native amphibians are extinct, we should accept the bullfrogs. The bullfrogs certainly continue to help pass energy on to other animals in the ecosystem, and they do cycle nutrients, but their buffet-style consumption of other animals is partly due to native animals not having adaptations or instincts to avoid predation by bullfrogs. The buffet results in a net loss of native species diversity, and that is a major issue. Ecosystems require a diversity of species to maintain functioning and to be resilient to stresses like landscape fragmentation and climate change. Ecosystem functioning serves to clean the air, maintain the soils, recycle nutrients, and filter wastes, to name a few of the services. To some degree, perhaps the loss of a few species may not result in big differences in ecosystem functioning, but at some point, the balance will tip, and functioning will lessen. In most scenarios, ecologists have no foolproof way of identifying the tipping point.

There is another catch to hedging our bets on having one amphibian species fill the ecological niche—if a bullfrog pathogen takes hold, for example, we will lose our key ecosystem player. Nature doesn’t usually put all her eggs in one basket, but rather has a variety of species to play each major ecological role. So by replacing the variety of native frog species with bullfrogs we are increasing the risk of malfunction for that ecosystem.

Invasive bullfrogs upset the balance of predator-prey interactions and competition for food and shelter, but they also may be worsening another ecological disaster in the amphibian world. A chytrid fungus, Batrachochytrium dendrobatidis, is wiping out populations of certain amphibian species all over the world and the ecological interactions are dramatic. The invasive American Bullfrog can act as a vector, harboring this fungus, with no ill effects, and spread it to other amphibians. Combine the invasive-bullfrog-harboring-pathogen scenario with climate change, which is producing stronger and more prolonged droughts in some areas, and native amphibians are in trouble. During drought, amphibians seek the few deep pools left, prime habitat for bullfrogs. Native amphibians end up eaten, outcompeted for food, and/or contract the fungus. But this story isn’t about frog doom and gloom. Understanding the complexity of these ecological interactions allows conservation biologists and naturalists alike to help mitigate the negative impacts of invasive species like bullfrogs by removing them.

Dr. Sarah Corey-Rivas is a Research Professor at New Mexico Highlands University in the Department of Biology and Chemistry. Dr. Corey-Rivas earned her PhD in Evolution and Ecology at the Ohio State University with an emphasis on cross-disciplinary approaches to conservation. She currently conducts research in conservation genetics with reptiles and amphibians, including studies of anaconda evolution and impacts of land stewardship practices on amphibian species diversity in Latin America.