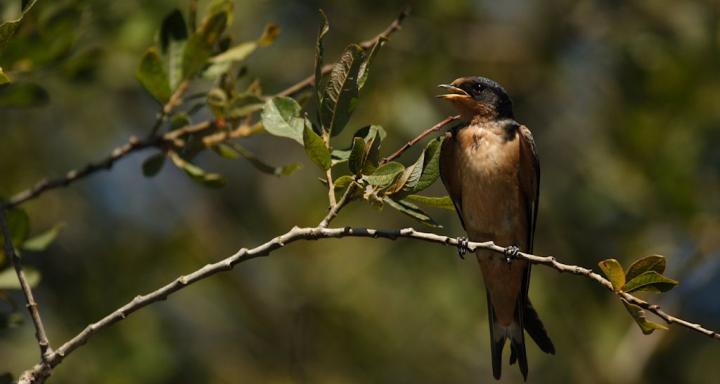 Before the advent of airplanes, people mimicked the design of bird skeletons in hopes of achieving the freedom of flight. A great many flapping and gliding contraptions were conceived and tested, endeavors that yielded only a sense of disappointment and a few good lessons about flight dynamics. Others involved in similar experiments were far less fortunate: condemned men in China sometimes met their end by being thrown from towers in such contraptions. These failures, of course, happened because the body of the bird is richly modified to enable flight; bird skeletons, lungs, and muscles are radically adapted for a flying lifestyle. Humans, however, lack the immense muscles necessary for powered flight; they also have long, flexible spines and heavy bones.

A number of flightless birds look quite a bit like their flying cousins: they have wings of typical size and feathers that are long and robust. And because it is easy to associate such feathers with an ability to fly, one might automatically assume they have the ability to simply take off if approached. But their feathers are useless for flight because of their physical build: their bird skeletons and musculature render them physically incapable of flying, an important reminder that it is much more than the feather that enables birds to roam the sky.

Bird bones are strong in proportion to their weight, and many are hollow, reinforced with an internal crisscrossing strut system that provides stability. In addition to the obvious advantage of reducing weight, hollow bones are pneumatic, which means that the hollow air spaces within the bones are directly connected to the respiratory system, enhancing respiratory efficiency. Flight may have had some influence on bird skeletons, but it is not solely responsible for its design. A species of carnivorous dinosaur (Aerosteon riocoloradensis) with telltale characteristics was recently discovered: it sports hollow pneumatic bones like those of birds, suggesting that the system may have evolved simply for more efficient breathing, to reduce weight, or to help keep the animal cool. While bird bones tend to be lightweight, individual bones are not always lighter than the bones of other vertebrates of similar proportions. Nonetheless, the skeletal structure as a whole is light and strong. The quintessential case is the frigatebird, whose entire skeleton is only half the weight of its feathers.

The tail, pelvis, and thoracic region of the spine are all fused to create sturdy platforms that reduce weight and provide the rigidity necessary to maintain the posture of the body during flight. The ribs also have lateral extensions that overlap (called the uncinate process), bracing together to form a sturdy cage that protects the lungs and heart from the crushing force of beating wings. This interlocking rib feature, which until recently was thought to be a characteristic specific to birds, has also been discovered in nonavian dinosaurs (Zhou 2004).

The structure of a bird’s neck makes it quite flexible. Because the forelimbs have little use beyond flight or swimming, the neck is crucial for the task of preening: the head must be able to reach most of its body to properly tend to feathers. While mammals have seven neck vertebrae, birds have eleven to twenty-five.

The furcula, the fused clavicles that we are familiar with as the “wishbone,” is much like a flexible spring that aids flight: on the downbeat, muscles contract and squeeze the ends of the furcula toward each other. When the wings have reached the lowest point of the downbeat and begin to draw upward, the furcula “releases” and rebounds to its original position, much like a bow letting loose an arrow.

To provide sturdy support for the flight feathers, the bones of the “hand” are reduced and fused. The bone of the forearm, the ulna, has a series of bumps along its trailing edge to which the secondary flight feathers attach directly. The keel, or breastbone, is extremely pronounced in most birds. Large and bladelike, it is a thin slab of bone along which the massive flight muscles are anchored. It also provides additional protection for the heart and lungs. Some flightless birds, specifically the ratites, have no use for a pronounced keel, and it is therefore absent. Others, such as penguins, use their “flight” muscles for swimming underwater, so they have retained their pronounced keel and powerful muscles.

The skull is extremely light as well. The heavy jaws and teeth of pro-avis were eventually replaced with a lightweight bill covered in a horny sheath. The teeth and jaws were replaced by the gizzard, a muscular organ that pulverizes food. Set low and far back in the body, it enables birds to essentially “chew” with a mechanism that does not hamper flight but makes it more efficient. Like its skeleton, a bird’s musculature is well adapted for flight. The muscles of most striking size are those of the breast, which power the wings. In many birds, these bulky muscles make up a full third of its overall body weight. And in species such as grouse, which make powerful bursts through the brush, they may contribute nearly forty percent.

For the most part, musculature is centered on the underside of the bird, establishing a steady center of balance. In comparison, the back has little muscle mass but stabilizes the hard-working underside. The wings and neck are covered with a complex, lightweight network of muscles that provides optimum strength and control.

The lungs of birds are surprisingly unlike those of most other land vertebrates. Due to their design and physiological complexity, they are among the most efficient on Earth. Bird lungs are small compared with those of mammals but connect to numerous inflatable air sacs that branch from the lungs into the muscles and even into the bones. And unlike mammals, which breathe in and out, their lungs inflating and deflating like a bellows, birds have a constant flow of oxygen in the lungs. They actually breathe in twice to complete one full respiration cycle: upon inhalation, air flows into the posterior air sacs, and then exhalation forces it from there to the lungs. On the second inhalation, air in the lungs, depleted of oxygen and full of carbon dioxide, flows from the lungs to the anterior air sacs, while fresh air flows down the bronchi to the posterior sacs once more. On the second and final exhalation of the cycle, the stale air is pushed up from the anterior air sacs and out of the bird. While mammals rely on a thick, muscular diaphragm to power their breath, the air sacs in birds are in part pumped by the action of hinged ribs and the furcula: with each beat of the wings, the lungs are compressed and then expanded, increasing ventilation during flight.

The respiratory system may owe some of its complexity and efficiency to high-altitude flight. Sparrows, when subjected to test chambers simulating twenty thousand feet, flitted casually about, demonstrating that they were largely unaffected and could ascend even higher. Mice, on the other hand, slumped helplessly in the same chamber, scarcely able to move. The highest altitude on record for a bird was documented when a Ruppell’s Vulture met an ill fate in the engine of a passing jetliner at thirty-six thousand feet.