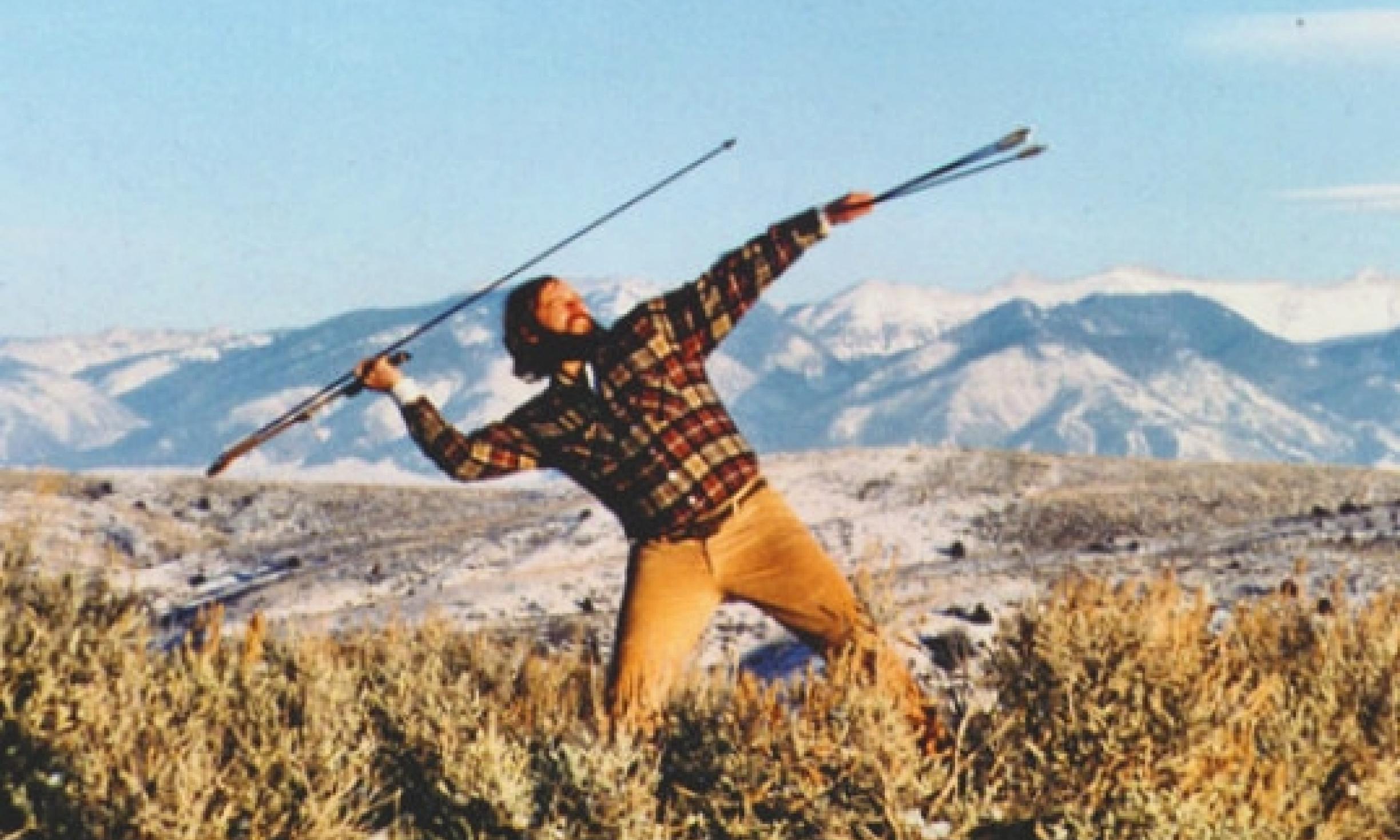 There it was, flying through the air with a perfect spin stabilizing its flight. An arrow on steroids, six feet in length, fletched like a traditional arrow with turkey feathers, secured to a fire- straightened dogwood shaft with deer sinew, with a business-end of duct tape simulating the weight of an arrowhead (or spearhead). This creation of mine was heading on a crash course for a large living room window that belonged to a friend and neighbor of mine, Malcom, a kind, World War II veteran. My son Tim, stepson Nic, and friends watched in amazement as this oversized arrow flew. This flight was significant, having been almost effortlessly launched and covering nearly twice the usual distance. “Please don’t hit that window, PLEASE!!!”

The arrow was not really an arrow; rather, it is called a ‘dart‘ or ‘atlatl dart‘ that was launched using an atlatl. This is a small yet important part of my journey into primitive technology. I was dead set on learning traditional bow-making, and it was not until I took a workshop on atlatls as a prerequisite that I became skilled at creating and successfully launching these potentially deadly projectiles.

These spear throwers, or ‘dart’ throwers, are commonly referred to with an Aztec name. Atl means far. Think of throwing a spear far, but with an atlatl, you can throw one very far. If you were an Aboriginal Australian, you would call it a woomera, and Yupik Eskimos called them nuqaq (nook-ack). In history, they were developed as hunting tools after the good old-fashioned spear, and before the bow. It is often referred to as the grandfather of the bow and arrow. Regardless of the name, this weapon system is a common denominator for humans worldwide. Evidence from artifacts or cave paintings has been found on every continent except Antarctica, but I have a buffalo nickel that says there is evidence of these hunting tools under the ice down there.

There are numerous styles and variations depending on what is being hunted, where on the planet the hunt is happening, who is hunting, and materials available for constructing these simple-to-complex hunting tools. Ultimately, it comes down to a stick and a lightweight spear.

This simple design allows the user to more than double the power and range of a normal throw. At some point, long ago, someone got tired of carrying around big bulky spears; to hunt more effectively and efficiently, they came up with the world’s first re-loadable weapon system. Over time, designs were adjusted and refined, and crafted into amazing works of art, as well as fine hunting tools.

The ‘stick part’, or thrower, had a point that fits into the end of the ‘dart’ that was held in place by the operator. Dart points were carved into the same piece of wood, bone, stone or antler, or a separate piece of wood was attached.

I initially began attempts at making atlatls from a small rough sketch found in a survival manual that did not give me much to go on. Ironically, I developed an obsession with these things from failed attempts at traditional bow-making. As it turns out, after a sickening crack of a bow that took countless hours to make, you still have a handle connected to a bow arm. Secure a point to the end, and it is a simple and effective atlatl. After experimenting with numerous designs, I found that the flexible type of atlatl is more effective when engaging targets at a distance (like that big $500 window), and the more rigid atlatl arms give you better control with a closer target. The spear shaft also makes a difference. A rigid, heavy, un-fletched shaft is more of a close-range tool for marine mammals or large fish. A lighter shaft with fletching and flexibility makes a great long-range weapon, perhaps for deer.

In the United States today, there is a steady growth of atlatl competitions. There are some states where it is legal to use them as hunting tools. One day, I intend to harvest a white-tailed deer using an atlatl. It may take a few more years, but I am in no rush. I simply enjoy the art of making them, and watching family and friends have a great time throwing atlatl darts. Also, I need more target practice.

As for Malcom’s window, I am happy to report that it is still intact. My ‘dart’ landed three feet short and two feet wide. A year later, I put the money saved by that miss toward a plane ticket and travel expenses to get to a small town at the foothills of the Washington Cascades to attend the Anake Outdoor School — but that is another story for another time.