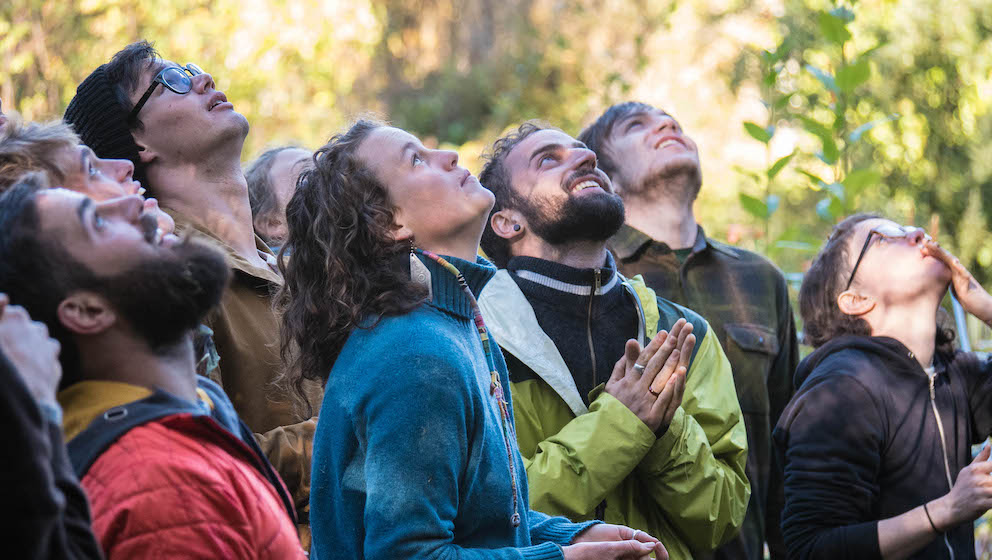 What a week full of fun! We gathered with our class this week for our first of three Village Weeks we will have throughout the year. We all headed into the week with a sense of mystery and unknown as there was not much telling of what we would be doing for the week. All we knew was that we would be camping on the land of Linne Doran and that fun things would happen and we would be part of them. Our village week officially began gathered in one of the circular structures on the land that has an earth floor with a fire pit in the middle.

All students are broken up into one of four clans. It was up to our clans to open the week by putting our friction fire skills to the test. We were asked to produce at least one coal per clan for the communal fire that would be burning during the entire week. It was great to hear the squeaking of cedar rubbing on cedar at great speed and intensities mix with the hooping and hollering of joy whenever a coal was produced, smell the sweet smoke from the burning cedar embers.

Because these were the days leading up to All Hallows Eve/Halloween/Samhain (the time when the veils between the worlds are the thinnest), we gathered together to honor our ancestors by each bringing something to represent our lineages. We placed these items in the main building for the duration of our week in the main building on Linne Doran.  We took some time to share some stories of those we loved that had passed away. This was a potent sharing for some of us. Our instructors took more of a back seat role for this week and the apprentices had more of an opportunity to shine, share their skills, passions, abilities and to instruct us in areas of their individual choosing.

The options were presented to us, then the hair pulling and deliberating began as we had to choose only one or two of the array of tantalizing offers. I joined a group that had the honor to work with three beautiful wild Coho Salmon. Half of our group dove into filleting the fish, cutting it into fat juicy strips, and creating a brine for them to soak in for the night. The other half of us went out into the woods to harvest materials to build a smoker that the brine-soaked salmon would hang on and get smoked through by a smoldering fire. We were able to practice our knots for lashing the structure together and also learn new knots to ensure that our creation would hold together well enough to not lose our sacred finned relatives in the fire. This process was full of laughter, joking, and pleasant conversation as our hands were busy piecing together the smoker.

As our group was hard at work, others were creating their own beautiful projects that ranged from pine needle basket making, friction fire, and a home study group. We gathered in a circle for the evening to have a delicious meal that was created with much love by The Immersion graduates and The Immersion community supporters. These meals were amazingly creative and labor-intensive. It was such a treat to have a great day full of crafting and be able to have the luxury to just stroll into dinner without worrying about preparing it. That evening, we were honored to have an amazing storyteller come to share his creative gifts with us.

Gene Tagaban, a Tlingit, Cherokee, Philippino had our class and community members in rapt attention as he embodied various animals and characters from his stories. We quickly found ourselves getting involved in his stories by doing some call and response and body movements to various verbal cues. His fabulous facial expressions and dynamisms had us anxiously anticipating his return to share more stories the following evening around a fire. The second day we once again we were presented with various options that the apprentices and guest The Immersion graduates would lead for us. We chose from; cedar basket making, mask making, flintknapping, mushroom hunting and land exploration, and smoking of the salmon along with storytelling.

Straightening of arrow shafts (salmonberry) in the flint knapping group. The rain joined us at various times during the day as we dove into our subject of choice. Each group spent the day engaged in their individual projects and then we came together at the end of the day for a meal and share stories of the adventures we each experienced. On day three we had a show and tell after the morning session. All the students placed the objects that we had created during the last three days on a cloth in the middle of the room and circled up around it. It was a time where we were invited to share what we had made, the process we followed to make our items, and if there were insightful things that came up for us as we engaged in these beautiful old ways of creating with the land and our classmates. It was fascinating to see the plethora of items on the cloth and hear in more depth what individuals had experienced throughout the week.

It was a week where we not only learned really great skills, but because we were staying on the land and most of our meals were prepared for us, we were able to get to have the time and space to build stronger connections between classmates, teachers, and apprentices. Many of us returned home content and tired from our first successful Village Week.

I wish that everyone could experience the magic of The Immersion at Wilderness Awareness School!