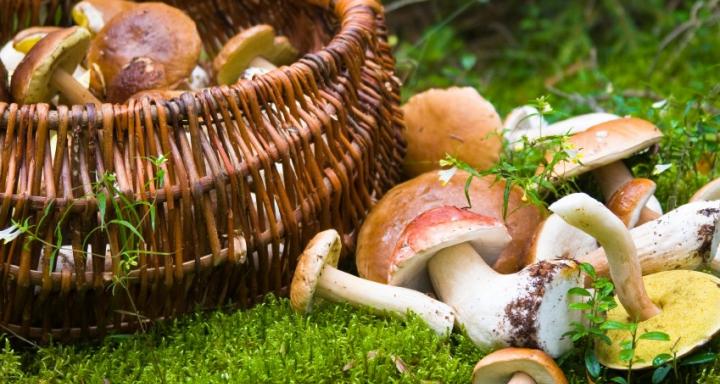 One of my housemates brought home a big mushroom for the dinner table. I sniffed at it suspiciously, nervous about the edibility of an unknown (to me) fungus. A friend came in and buried her face in the plate-sized cap. “It smells like…” she searched for the term. “A beautiful woman’s hair,” she claimed decisively, provoking laughter in the kitchen as we got ready to stir-fry the mushroom. It was Agaricus augustus, and that kicked off my summer of researching the fungal kingdom.

Fungi are their own kingdom of course, neither plant nor animal. Odds are good that there are fungal spores in the air next to you now. From the Irish potato famine to a case of athlete’s foot, mushrooms and molds have intertwined themselves in human history. Enjoying your slice of toast? Thank the yeasts that made it rise. Saved by penicillin? Good thing a housewife from Peoria sent a moldy cantaloupe to an army lab in 1941, discovering the strains of commercially available penicillin. For all that we naturalists ooh and aah over creatures with fur and feathers, fungi are just as mysterious and magical.

Another glimpse into the world of helpful fungi came when my houseplants started acting strangely. Why was one persimmon tree growing vibrantly out of its pot, while the other languished? Why did one of my tea plants thrive and the other shrivel? I was treating them both the same. I mentioned this mystery to another of my housemates and she got a guilty look on her face. “Actually, I’ve been experimenting with mycorrhizal associations,” she confessed. Wherever I had two of the same kind of plant, each in a separate pot, she sprinkled mycorrhizal fungi on one of them. And yes, those turned out to be the healthier plants. Out in the lush northwestern forests, small rodents scurry around doing the work that my housemate had replicated. A flying squirrel or vole might dig up a truffle to eat, then later produce a fecal pellet brimming with fungal spores. Increasing evidence suggests that trees inoculated with helpful fungi grow more vigorously than their fungus-free brethren. At least that’s what my houseplants tell me.

You know that fungi produce spores instead of seeds. Classification of mushrooms is based on where they wear their spores. This is all very teeny-tiny, happening in the reproductive cells of the fungi, so you’ll have to take the mycologists’ word for it. There are two main groups of visible fungi. The first are ascomycetes (pronounced ass-ko-MY-seets), which bear their spores inside cells called asci. A couple of ascomycetes you might recognize are truffles, baker’s yeast, and apple scab. Don’t get carried away finding them all; there are over 30,000 species of ascomycetes in the world. But there are even more basidiomycetes! If (with a microscope) you see that spores are forming on cells called basidia, well, it’s a basiodiomycete. All the familiar mushrooms and toadstools belong here, as well as puffballs and bracket fungi.

There’s also a grab-bag category for all the fungi where science has yet to find spores forming at all. These fungi may have evolved enough so that the sexual cycle is completely unnecessary. Besides not worrying about Valentine’s Day, this group of fungi contains many that are important to humans, like athlete’s foot. Called deuteromycetes or Fungi Imperfecti, many species in this category turn out to have identifiable spores when scientists look closely enough. They can then get placed in with ascomycetes or basidiomycetes accordingly.

For lack of a better option, science created yet another grab-bag category, the phycomycetes, for some mychorrhizal fungi and bread molds. The take-home message is that there are lots of fungi and we know very little about them. Mycology lags behind other sciences like ornithology. Why so little attention to fungi from classical natural history? Turns out that fungi were considered to be associated with evil forces, and studying them was highly suspect until the mid-19th century. I don’t know about evil forces, but writing about fungus taxonomy is wreaking havoc on my computer spell-checker.

Even without the skills to identify and eat mushrooms, their amazing shapes and uses are a favorite among students of all ages. Most any kid in summer camp loves to poke puffballs to see the cloud of emerging spores, especially when we find the ones called “fox farts” or “wolf farts.” Yes, that’s what Lycoperdon means, look it up if you don’t believe me.  On a utilitarian note, I carry a charred bracket fungus in my fire bag. After finding it on a birch tree in northern Idaho this summer, I tucked a coal from the fire inside of it. The fungus glowed for hours, steadily keeping the fire alive. In fact, I had a hard time getting the coal to go out when I wanted to put it back in my bag!

Well, the biggest trouble I ran into while writing this article was getting my nose buried in mushroom books for hours on end. A local naturalist par excellence, Rob Sandelin, shook his head sadly when I told him I had never been mushroom hunting. “You’re missing out on a vast world of food and medicine, especially here in the northwest.” Food? If there’s food to be had, I have to investigate. I’m well aware of the cautions about eating deadly mushrooms, but David Arora’s helpful and funny books have enough guidelines that I think I’m ready for a walk in the woods. I’ll get my own copies of Arora’s books and stroll through the misty fall forest on a fungal treasure hunt. This will require all my Kamana-sharpened senses and knowledge of place. If there are things out there that smell like a beautiful woman’s hair, I want to go find them.

All That the Rain Promises and More… by David Arora. A hip pocket version of the previous guide, and highly entertaining reading.

Mycelium Running: How Mushrooms Can Help Save the World, by Paul Stamets. This book lives up to its subtitle, with detailed instructions on how you can save the world.