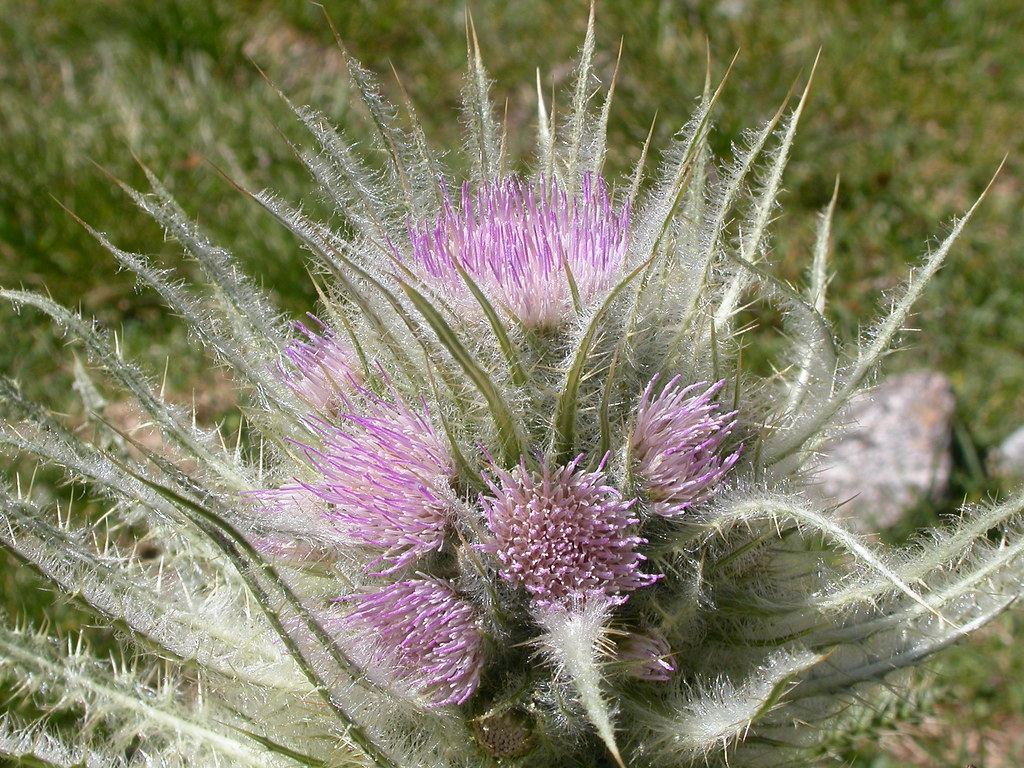 Much like an angel glowing in the light, the elk thistle (Cirsium scariosum – also known as meadow thistle) often glows in the sunlight reflected off its abundant silvery hairs and spines. We saw many of these glowing angels on a recent walkabout, crisscrossing the continental divide through the Anaconda-Pintlar Wilderness of Montana.

As is customary on our walkabouts, we hoped to incorporate wild foods as a significant part of our diet. However, due to a cold, wet spring, the huckleberries and strawberries were maturing far later than usual. For salads, we found plenty of brook saxifrage and dandelion leaves, garnished with the flowers of shooting stars, blue violets, and bistorts, topped with some Caesar dressing for calories. But we hoped to find something of greater substance, too.

Although I’ve eaten elk thistles before, I always thought of them as a tasty treat rather than a main dish. I would carefully grab the top of the plant, bend it over to see how flexible the stalk is and then cut it off with a knife where the stalk begins to stiffen. Peeling back the hairy/spiny outer rind reveals a juicy stalk that is reminiscent of celery. It is fun to peel a few of these stalks, but a bit daunting to try harvesting them in any quantity.

This time, however, it occurred to me that the densely packed, immature flower head may have some potential as food. I found a flower stalk where the buds were not yet fully differentiated and carved away the hairy spines on the outside to reveal a carbohydrate-rich core the size of a small pear. We sliced it up raw and passed it around. It was pretty dang good. The next one we put right on the fire, to reduce the labor even more, by burning off the hairs and spines. The blackened flower head that came out of the fire was not only ready for eating, but it was also amazingly delicious!

We also dug up a few elk thistle roots. I’ve been disappointed by other thistle roots as too woody to be considered as food, but the elk thistle roots were surprisingly good. These are the roots that explorer Truman Everts subsisted on while lost for thirty-seven days in 1870 in what soon-after became Yellowstone National Park.

Wild foods are often scarce in the Rocky Mountains, where sandy soils and sparse rains effectively dwarf the plants in comparison to other regions. In timed studies, I can rarely harvest more than one cup of huckleberries, wild strawberries, bistort or spring beauty roots per hour of effort, which hardly makes it worthwhile. But sometimes there are great wild foods hiding in plain sight. Although I’ve known the elk thistle for more than twenty years, on this trip I saw it in a whole new light.

Thomas J. Elpel is the author of Botany in a Day, The Patterns Method of Plant Identification, and Participating in Nature: Wilderness Survival and Primitive Living Skills.  Check out Tom’s website for lots of other resources: www.hopspress.com